Cuenca is a city in central Spain, and also the capital of the province of the same name, one of the largest provinces in Spain. The historical old walled town of Cuenca has been given the UNESCO World Heritage stamp and contains the city’s biggest tourist draw – “Las Casas Colgadas” (The Hanging Houses). Beautiful views can be had from the medieval streets of the “upper city” over the modern city below and the plains of Castilla-La Mancha.
Under the Roman Empire the place where Cuenca is located today was uninhabited. Muslim troops conquered the area in 714 and realized the value of its strategic location. They built “Conca Alcazaba” (Arabic fortress) between two gorges dug between the Júcar and Huécar rivers, surrounded by a one km long wall. Cuenca soon became an imporant agricultural and textile manufacturing city.
Cuenca’s medieval streets are packed with charming fountains, arches and narrow streets. As well as the Casas Colgadas there are many other places worth a visit such as the Provincial Museum, the Casa del Curato, the Diocesan Museum and the Bishop’s Palace. On the way to the highest point in the city there are some very interesting religious buildings such as the churches of San Miguel, San Nicolás and San Pedro, and the hermitage of Nuestra Señora de las Angustias. You can also climb to the Plaza de la Torre Mangana, a former watchtower for Cuenca and one of the symbols of the city, visible from any other point.
A good time to visit Cuenca is during the Religious Music Week, a Festival which takes place at Easter. Various venues across the city house a variety of different performers and these include the Cuenca Auditorium, the church of San Miguel and the Museum of Spanish Abstract Art. Easter is also a fine time to visit any Spanish city as the streets all across Spain are alive with festivities and celebrations. 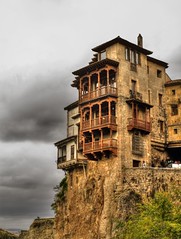 “Las Casas Colgadas” (The Hanging Houses) are symbolic monuments of Cuenca dating back to the 14th or 15th century. They are extremely simple flat fronted dwellings that cling precariously to the side of the hill facing the River Huécar. Some of the houses are really quite high and it seems a miracle that they do not topple into the great ravine. One of the houses contains the Museum of Spanish Abstract Art, one of the best in Spain.
To reach the houses, which are part of the old town, it is necessary to scale steep, narrow cobbled streets that link the new and old parts of the town. The climb is tough, but definitely worth the effort. Medieval Cuenca is truly fascinating and there are many things to see there besides the Hanging Houses. And if you have had enough of walking up and downhill there are of course always many very welcoming tapas bars readily at hand. La Mancha weather can get pretty sweltering in the summer months, so a cold cerveza can be quite medicinal.
Photo by javier.losa 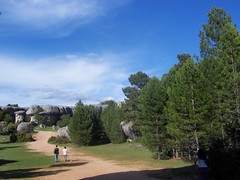 Twenty minutes outside of the city you will find yourself in the beautiful rolling hills of the Cuenca Mountains. Amazing views across the vast colourful lands of Castilla-La Mancha are available from all angles. This is also home to the unique “Enchanted City”, an intriguing area made up of weird and wonderful rock formations that water and wind erosion have carved from the huge limestone rocks throughout the course of history. Most of the rock formations have been given names tags such as the “Man’s face”, the “Toboggan”, the “Elephant and Crocodile”, “The Sea of Stone” and “Diplodocus” because of their stark resemblances. The Enchanted City is open all year round, from 10am until dusk. There is a small entrance fee, but you can easily spend two or three hours moseying about from rock to rock.
Further north is the El Hosquillo Hunting Reserve and the Solán de Cabras Thermal Spa Resort. Solán de Cabras is famous for its medicinal spring waters and the area is well worth exploring with its abundance of beautiful landscapes and waterfalls. Another popular place to visit is the county of La Alcarria, where you will find some of the places described in “Viaje a La Alcarria” the work of the Spanish Literature Nobel Prize-winner Camilo José Cela.
More streams, waterfalls and lakes can be found South-east of Cuenca in Selva Pascuala, Cañete and Moya. Renaissance convents, cave paintings and monumental sites, made up of fortresses, walls and Gothic churches are some of the attractions here. The western part of the province is rich in history, particularly Saelices with its Roman ruins and the southern area is interesting for its windmills of Mota del Cuervo and the spectacular castles of Belmonte and Alarcón.
Photo by febs
Castilla-La-Mancha is a great region for big high calorie hearty dishes such as hotpots, lamb and game and Cuenca will not let you down if this is the kind of food you enjoy. Top quality ingredients are readily at hand and there is also a strong La Mancha tradition of gastronomy still adhered to today in Cuenca.
Cuenca also offers a few exclusive dishes and unique methods of preparation such as “Zarajos”. This is a spicy and extremely tasty dish that consists of lamb’s guts roasted in a wood-fired oven after being rolled on a piece of vine shoot. Basically, roast lamb tripe. However, Cuenca’s most unique and interesting dish has to be “Morteruelo”, made from grated pig’s liver, chicken, cured ham, pig’s lard, walnuts and spices. This is served hot as a kind of pâté.
Meat and game dishes are predominant in the province, but the mountain streams also provide beautiful trout and fish dishes can also be a real treat. Almonds, honey and figs make up the local favourite dessert known as “Alajú”. No meal is complete without the fine Manchegan cheese and, with regards to drinks, La Mancha wines are generally very good and also very well priced and there is a Cuenca liqueur to sample – “Resolí” – made with coffee, sugar and orange peel. 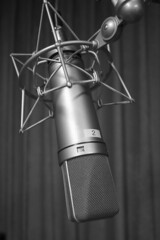 José Luis Perales was born on January 28th, 1945, in Castejón, Cuenca. He is a popular Spanish singer-songwriter and composer.
At sixteen Perales went to the Universidad Laboral of Sevilla to study electrical engineering. It was here that he learned to play the guitar and here that he realised that music would shape his life. He was quite shy and unsure of his own talent. His first musical ventures were as a composer because he didn’t enjoy singing. Eventually it was his mother who pushed him to sing and he started out with a few low key appearances at local festivals in his town.
In 1970 the musical career of Perales was kickstarted by Rafael Trabucchelli, an influential Spanish music producer. Trabucchelli spotted the talent in the shy young composer and wanted to hear more of his singing. It took a lot of effort and encouragement from Trabucchelli, but Perales finally gave singing a proper go. His first record, “Celos de Mi Guitarra” (Jealousy of My Guitar) was a massive Latin success.
Perales still lives in Castejón with his family – wife Manuela, son Pablo, and daughter Maria. His back catalogue amounts to 27 recorded albums chalking up 50 million copies sold worldwide. His compositions have been recorded by singers such as Raphael, Rocío Jurado, Miguel Bosé, Isabel Pantoja, Julio Iglesias and La Oreja de Van Gogh among others and he has performed all over the world. His most famous singles are “Quisiera Decir tu Nombre” (I Would Like to Say Your Name), “¿Y Como es Él?” (And What Is He Like?) and “¿Que Pasará Mañana?” (What Will Happen Tomorrow?)
Photo by Tanki
The Spanish Blog