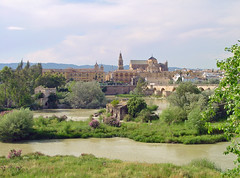 Córdoba is the capital of the province of the same name and is located in Andalusia, southern Spain on the banks of the “Guadalquivir” river. It was originally called “Corduba” when founded by Claudius Marcellus in Roman times.
It is estimated that in the tenth century Córdoba had up to 500,000 inhabitants, making it the largest city in Western Europe and, maybe even, in the world. Today Córdoba’s old town contains many impressive architectural reminders of when the city was the thriving capital of the Caliphate of Córdoba that governed almost all of the Iberian peninsula. The city is located in a depression of the valley of the “Guadalquivir” with easy access to the rich mining resources of the Sierra Morena (coal, lead, zinc).
Córdoba has a Mediterranean climate with Atlantic coastal influences. Winters are mild with isolated frosts. Summers have the highest maximum and minimum temperatures in the whole of Europe. Local minimum summer temperature is about 27 °C. Rainfall is concentrated in the coldest months and is generated by storms from the west that occur more often from December through February.
Photo by BK59 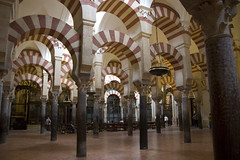 Córdoba was of huge importance during Roman times and was the capital of the Roman province of “Hispania Ulterior Baetica”. Some of the greatest Roman philosophers, orators and poets came from Roman Córdoba. In 716 the city was captured by the Muslims and by the tenth century, it was one of the most advanced cities in the world, as well as a great cultural, political and economic centre. In 1236 Córdoba was captured by King Ferdinand III during the Spanish “Reconquista”.
“Reconquista” means “Reconquest” or “Recapture” and is used to define the period of 800 years in the Middle Ages when Christian kingdoms of the Iberian Peninsula succeeded in retaking the Iberian Peninsula from the Muslims. The Islamic conquest of the Christian Visigoth kingdom in the eighth century extended over almost the entire peninsula, with the exception of parts of Galicia, Asturias, Cantabria and the Basque Country. By the thirteenth century all that remained was the “Nasrid” kingdom of Granada. This was conquered in 1492 and the entire peninsula was brought under Christian leadership.
Evidence of the Muslim occupation can be most clearly seen in the Córdoba Mosque. Columns date back to the Roman and Visigothic periods, but the building was primarily constructed during the Islamic “Umayyad” period (from about 784) and was one of the largest mosques in the world at the time. It was later converted back its original use as a Church after the “Reconquista” and today it is a Roman Catholic Cathedral and the main church of the diocese of Córdoba.
Photo by ArminFlikr 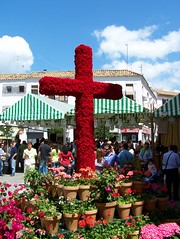 “Cruces de Mayo” (The May Crosses) is a festival that is celebrated in many parts of the world and is extremely important in Andalucia – particularly in Córdoba.
According to the legend, Saint Constantine dreamed of a cross that was supposed to help him win a losing battle. He ordered his troops to build a large cross, they then took it into battle and won the war. This inspired his mother, Saint Helen, to go in search of the real cross upon which Jesus was crucified. Her main problem was not so much in finding the cross, but in figuring out which one of three crosses was authentic. This eventually became clear when one of them produced miracles and Saint Helen is then said to have become a champion for the cross, urging people to continue to worship it even after her death and this veneration of the cross is the real reason behind the May Crosses Festivals.
“Cruces de Mayo” in Córdoba has also become a contest with those who decorate the crosses competing for prizes. This first began in 1953 and has been a tradition ever since. Springtime is a wonderful time to visit Córdoba as the city is awash with flowers. May kicks off with a parade called the “Battle of the Flowers” that involves a long procession of flower-covered floats the weave through the city. “Cruces de Mayo” follows soon after and the city gets even more flowery as festival season comes alive. The streets are lined with tents where the people eat, drink and make merry and in addition to the “Sevillanas” that are played during the day, there are numerous live musical performances at night.
Photo by Pedronchi 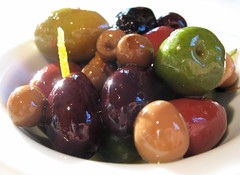 Córdoba’s cuisine is based on the high quality of its local produce. The mountains, “Guadalquivir” river valley and local farmlands provide fantastic lamb, pork, beef, game meats, cereals and pulses. Córdoba is a major producer of olive oil and you can find olive oils of the very finest quality here. They are typically used in salads, “Gazpachos” (cold tomato and garlic soup), on bread and with numerous fried dishes. Oils with the designation of origin “Baena” and “Priego de Córdoba” are ideal for frying and have a deep and fruity flavour, a wonderful aroma and are low in acidity. Although Córdoba has no coastline it also receives daily stocks of the finest fresh fish.
Centuries of Muslim rule can be clearly seen in Córdoba’s cuisine. Typical local dishes include oxtail hotpot, lamb casserole, “Flamenquines” (traditional fried meat rolls) and honey lamb. The local hams and sausages are also excellent and these include “Valle de los Pedroches” cured ham, salami from “Pozo Blanco” and black pudding from “Fuente Ovejuna” and “Hinojosa”. Fresh “Gazpacho” is something very Andalusian and is perfectly refreshing and nutritious on a hot summer’s day.
There is a “Gazpacho” style soup called “Salmorejo” that is typical to Córdoba and consists of tomato, bread, oil, garlic and vinegar. Normally, the tomatoes are skinned and then puréed with other ingredients. The soup is served cold and garnished with ham, eggs and sometimes rabbit. It has a pinky orange appearance like “Gazpacho”, but is much thicker because it includes more bread.
Photo by jurvetson
Córdoba was subject to frequent invasions and each conquering wave added their own mark to the city’s architecture. The former “Mezquita” (mosque) of Córdoba is now a Roman Catholic cathedral. It was originally built as the Christian Visogoth church of St Vincent in approximately 600 AD and then refashioned as a mosque in 784 AD after the Muslim conquest. It became the second-largest mosque in the world and today is regarded as one of the most accomplished monuments of the “Umayyad” dynasty.
Córdoba reached its zenith under Abd ar-Rahman III in the tenth century, one of the great rulers of Islamic history. Córdoba was one of the largest, most prosperous cities of Europe, even more prestigious than Byzantium and Baghdad in terms of science, culture and art. In 1236, Córdoba was recaptured from the Muslims by King Ferdinand III of Castile and the mosque was reconsecrated. Alfonso X oversaw the construction of the “Villaviciosa” Chapel and the Royal Chapel within the structure of the mosque. The kings who followed added further Christian features. The most significant alteration was the construction of a Renaissance cathedral nave in the middle of the structure by permission of Carlos V.
There are many other very interesting buildings to visit in Córdoba and these include the “Alcazar” (a fortress built by the Christians in 1328), the “Calahorra Fort” (built by the Arabs to guard the Roman Bridge) and the ancient Jewish Synagogue, now a museum. Córdoba’s medieval quarter is called “La Judería” and was once the home of the Jewish community. It is a fascinating labyrinth of narrow, winding, narrow streets, courtyards and lovely squares such as “La Plaza del Potro”.
The Spanish Blog