Cáceres is located in Extremadura and is the capital of the Cáceres Province. It was founded by the Romans in 25 BC, but there is evidence (seen in the caves of Maltravieso and El Conejar) that there have been settlements here since prehistoric times. The ancient walls of the old town are still visible and within them lies a perfect medieval town that has been little changed over time. Numerous films have been shot here for this reason.
In 1986, Cáceres was declared a World Heritage City by UNESCO due to its fantastic blend of Roman, Islamic, Northern Gothic and Italian Renaissance architecture. It is defintely one of the best examples of the medieval and renaissance eras in the world. “Torre del Bujaco” is the most famous of the many towers from the Muslim period still standing in Cáceres.
Cáceres is a wonderful example of evolution, determined by two very different constructions – the Arab fortress and the Feudal City. The city flourished during the Reconquista and the discovery of America, with rich Spanish families choosing it as the location to spend their new found riches and build homes and palaces. There are four main areas to be explored: the historical quarter, the Jewish quarter, the modern centre, and the outskirts. 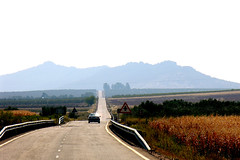 Cáceres is located between the Sierra de la Mosca and la Sierrilla mountains in the centre of the Iberian Peninsula. Extremadura is dominated by pasture lands and grain cultivation.

There are some very interesting and now unfortunately endangered animals roaming the plains including the Spanish Imperial Eagle, the Cinereous Vulture, the Black Stork, the Iberian Lynx and the Wolf. European cranes travel every winter to the Extremadura pastures. Extremadura’s most famous resident bird is the The Great Bustard. The Great Bustard breeds in southern and central Europe, where it is the largest species of bird, though its numbers are sadly declining due to habitat loss. The male of this huge bird is possibly the heaviest bird still in existence capable of flight, alongside the Kori Bustard. An adult male typically is 90-110 cm long with a 2.1-2.5 m wingspan and usually weighs from 10 to 16 kg.

Extremadura sees typically temperate winters and dry summers. Average annual temperatures are about 16° – 17°C. During summer things heat up considerably and the average July temperature is over 26°C with a daytime maximum of over 40°C. Winters are relatively calm and mild with the lowest temperatures found in the high mountainous areas.
Photo by PhillipC
Cáceres is a city that is proud of its cuisine and values above all quality, fresh, local ingredients. Its salt-cured ham, red wine, goat cheese and sheep cheese are renowned throughout the country. It is also famous for its stews, roasts (pork, lamb, venison pheasant and partridge), pastries and honey.
Some popular local dishes are “Frite” (kid stew) and “Pestorejo” (pork snout and ear stew) and “Migas” (fried breadcrumbs with garlic, peppers and bacon, eaten for breakfast or lunch). Fish plays a minor role in Cáceres cuisine, however there are some excellent cod, tench and trout stews using fish drawn from the rivers Jerte or Pinofranqueado.
The wines from Extremadura are generally very good and also quite affordable. A typical local wine is a full-bodied red, a perfect accompaniment to a good hearty roast meat dish. “Pitarra” is a well known local wine and cherry, blackberry and chestnut liquors are also popular locally produced drinks. The small villages surrounding Cáceres offer fantastic, cheap and fresh local produce that includes “Torta del Casar” (sheep cheese), fig cake, chestnuts, hams, lamb, olive oil, and “Pimentón de la Vera” (paprika). 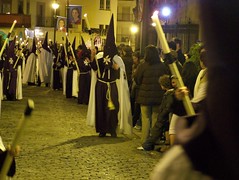 April is the big month in Cáceres for festivities and celebrations and the highlight is the San Jorge Festival celebrated on April 22nd-23. This culminates in the dramatisation of the fierce fights between the Moors and Christians and a dragon is burnt on a bonfire in the town square as fireworks light up the sky.
Cáceres Carnival, also known as The Festival Of The Candles (“La Fiesta de las Candelas”), takes place in February and features a procession where the Virgin of Candelas departs from a small Roman temple situated in the heart of the Monumental City and lots of music and dancing in tents placed in the streets.
“Semana Santa”, or Holy Week, is central to the calendar of every Spanish town and city and begins the week before Easter Sunday. Processions wind through the narrow streets of historical Cáceres and music fills the air. “Saetas” are devotional songs sung with passion by the locals. Other notable festivities are “Fiesta de los Mártires” (Festival of the Martyrs) held in January, “Fiesta de San Blas” held in February, Extremúsika Music Festival held in March or April, Womad Music Festival held at the beginning of May and “Ferias de San Fernando” held at the end of May.
Photo by Pedronchi
The architecture of Cáceres clearly displays the city’s history of battles between Moors and Christians and is a fascinating blend of Roman, Islamic, Northern Gothic and Italian Renaissance styles.
There are about thirty towers still standing in Cáceres and of these “Torre del Bujaco” is the most famous and has become an emblem of the city. Its name is taken from “Caliph Abú-Ya’qub” the leader of the troops that took Cáceres in 1173. Before that time the tower was known as The Clock Tower and served as a defensive bastion.
The Bujaco Tower is open to the public and within its historic walls is housed a wonderful exhibition that explains in detail the different historical periods. You can climb to the upper area of the tower for superb views over the city and its surrounding area.