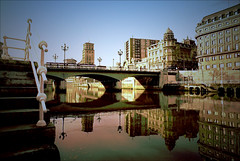 Bilbao in northern Spain is the capital of Vizcaya, one of the three provinces of the Basque Country (Pais Vasco). Since its foundation, more than 700 years ago, Bilbao has been the fundamental factor in the socio-economic modernisation of Vizcaya. It is the largest and livliest Basque city with very modern feel. It is constantly reinventing itself and boasts spectacular projects and impressive contemporary architecture, such as the famous and still hugely impressive Guggenheim Museum.

Bilbao also boasts an impressive selection of restaurants and shops, together with a vibrant nightlife to rival any city. Its backdrop of green hills and wonderful nearby coastline and beaches is unspoilt and startlingly green. Bilbao has long been a major tourist destination. Its weather may be the only real drawback with a high chance of rainfall at any time of the year. Bilbao’s public transport network is excellent and includes a stylish and modern Metro subway system. The old part of Bilbao, Casco Viejo, is known for its historic buildings, narrow alleyways, pintxo (tapas in Basque) bars and street entertainment.There are a good selection of hotels throughout the city of Bilbao, with many of the city’s most popular accommodation options being based in the heart of the city and close to the main attractions.

Bilbao loves its football and the red and white stripes of Athletic Bilbao are visible almost everywhere. Athletic Bilbao is a team made up of solely Basque players and the city is fiercely passionate of its local heroes. Football was introduced to Bilbao through its British connections; British steel and shipyard workers and Basque students returning from schools in Britain. In the late 1800s Bilbao was a very important port and an industrial area with its iron mines and shipyards. It was the momentum of the Spanish economy and highly attractive to many migrant workers, including miners from north-east England and shipyard workers from Sunderland, Southampton and Portsmouth. The British workers brought with them the game of football and Bilbao fell in love. In the early 1890s these workers formed Bilbao Football Club.

At the same time educated Basque classes were making the opposite journey to Britain to complete their civil engineering and commerce studies. There they also developed an interest in football and on their return to Bilbao began to organise matches with British workers. In 1898 students belonging to the Gymnasium Zamacois founded the Athletic Club. Notice the English spelling. In 1902, in the first Copa del Rey tournament, the two Bilbao clubs played as one and were known as Club Vizcaya. They won the trophy, defeating FC Barcelona in the final. The two clubs subsequently combined officially and became known as Athletic Club de Bilbao in 1903. 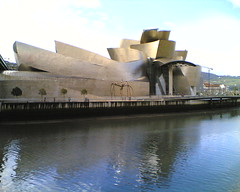 The Bilbao Guggenheim Museum is the cultural and tourist driving force of the Basque Country. This spectacularly modern building, built by Frank O. Gehry in 1997, is beautifully designed inside and out and arguably more interesting than any of the art exhibitions it houses. It is completely covered with titanium sheets and it is said that Gehry received the inspiration for his revolutionary design when looking at a fish in his bath. It exhibits its own private collection, in addition to sharing with New York and Venice the world’s largest and most impressive private collection of modern and contemporary art. The Fine Arts Museum is also among the best of its kind in Spain with three main collections: art through the centuries (El Greco, Zurbarán, Goya, and Van Dyck), contemporary art (Gauguin, Bacon, and Tàpies), and Basque art (Regoyos, Zuloaga, and Iturrino). 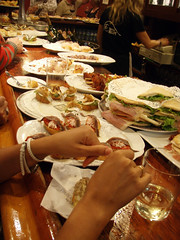 Bilbao has an abundance of top quality restaurants offering the very best in Basque gastronomic art. Its restaurants range between the Michelin-Star awarded restaurants and the less sophisticated steakhouses, cider houses, taverns, outdoor bars or “txakolis”.

“Pintxos” (Basque Tapas) are small appetizers made up of various ingredients that are readily available on bar counters and dangerously difficult to resist. They range from the simplest and most traditional dishes to the most sophisticated and imaginative food masterpieces. A traditional pintxo contest in which local bars and restaurants take part is held in Bilbao every year.

Eating pintxos usually goes hand in hand with “poteo” or bar hopping, which consists of drinking txikitos (small glasses of wine), cider or zuritos (small glasses of beer) while standing with friends and moving from one place to the next. All around Bilbao’s Casco Viejo (Old Town) are bars offerring a wide variety of excellent pintxos. The most traditional pintxos are calamari (rabas), mussels in hot tomato sauce (tigres), mushrooms, cod, peppers and omelets. 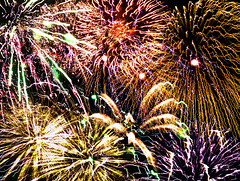 For one week every August Bilbao goes completely wild night and day as the city revels in the summer fiestas. More than 100,000 people join in the Bilbao “Semana Grande” (Big Week) celebrations, which include street theatre, music concerts and traditional Basque sports. The streets are where the action takes place and this week sees them lined with marquees constantly spewing out fabulous smells and party music.

Music is central to the fiestas and there are all sorts of weird and wonderful free performances on stages in squares and churches throughout the city. Every night a major concert kicks off at midnight and continues well into the small hours. Bilbao is a city that buzzes all through the night and the bars and nightclubs are usually full until the sun comes up.

Each night there is an important international firework competition. The River Nervion becomes lined with spectators who watch in awe at some of the most impressive displays you will see anywhere in the world. The Bilbao fiestas are fantastic entertainment for literally all ages and the atmosphere in both friendly and fun.

Kepa Junkera is a Basque accordion master from Bilbao. He is a highly skilled musician, probably most famous for his awesome abilities with the “Trikitixa”, the Basque style of diatonic accordion. “Trikitixa” is translated as “Bellows from hell”, you get the idea!
With a very musical family, music has been his life since an early age. The Trikitixa was the first instrument that he took a proper interest in and he cut straight to the chase developing his own style of playing and rewriting the rule books as a young lad. In 1983 he was spotted by the band Oskorri who quickly persuaded him to collaborate with them on their albums and tours playing his Trikitixa.
Junkera has always been an innovator and he was recognised quickly receiving an award in Madrid for the best young contemporary folk artist in 1990. Since the 90’s he has enjoyed blending jazz and the traditional dance music that is associated with the trikitixa to great success. In 1992, Trans-Europe Diatonic was born, a special diatonic accordion trio project with John Kirkpatrick and Riccardo Tesi. Junkera also explored folk-rock in collaboration with Ibon Koteron, a master of the “Alboka”, a Basque wind instrument made out of two ram’s horns.
In the late ’90s, he played his Trikitixa with the Bilbao Symphony Orchestra and the interesting and intricate results were very warmly received. A greatest-hits collection called “Tricky” is available and well worth a listen.