Barcelona is the second biggest city in Spain, behind Madrid and is the capital city of the Autonomous Community of Catalonia. It is located in the north east of Spain on the Mediterranean coast between the mouths of the rivers “Llobregat” and “Besòs” and is bounded to the west by the “Serra de Collserola” ridge. As the capital of Catalonia, Barcelona is home to the seat of the Catalan government.
Spain is a parliamentary monarchy, organised into autonomous communities. The “Generalitat de Catalunya” is the autonomous political institution of Catalonia. The political autonomy of Catalonia within the Spanish State is a long-standing tradition dating back to the Middle Ages in the form of the mediaeval institution which ruled the Principality of Catalonia (“Diputació General de Catalunya”). The first modern “Generalitat” was installed during the period of the second Spanish Republic, in 1931, and restored as a result of the transition to democracy. Catalonia’s Statute of Autonomy is the fundamental institutional law of the region, defining the rights and duties of the citizens of Catalonia, its political institutions, their powers, and their relations with the Spanish State, as well as the finances of the “Generalitat”.
Barcelona is a major tourist destination and an important cultural centre with a rich cultural heritage. Particularly renowned are architectural works of Antoni Gaudí and Lluís Domènech Montaner that have been designated UNESCO World Heritage Sites. The city is well known in recent times for the 1992 Summer Olympics and is the location of the headquarters of the Union for the Mediterranean. It is a major economic centre with one of Europe’s principal Mediterranean ports and an International Airport that is the second largest in Spain after Madrid-Barajas Airport. 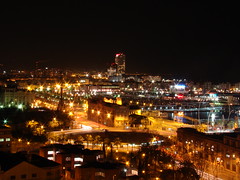 In about 15 BC Barcelona was a small Roman colony with the name “Colonia Faventia Julia Augusta Pia Barcino”. At first it was eclipsed by neighbouring Tarragona, but gradually grew in wealth and favour due to its wonderful location and excellent harbour. The distinctive Roman grid planning is still clearly visible today in the layout of Barcelona’s old quarter and some remaining fragments of the Roman walls are visible in the city cathedral, said to have been founded in 343.
Barcelona was conquered by the Visigoths in the early fifth century and by the Moors in the early eighth century. The County of Barcelona was created by Charlemagne (Charles The Great, King of the Franks) after he had conquered the lands north of the river “Ebro”. He created “La Marca Hispanica” and partitioned these lands into various counties, of which the Count of Barcelona became dominant. “La Marca Hispanica” broadly refers to a group of early Iberian counts created by the Franks, of which Andorra is the sole autonomous survivor. As time passed, these counts merged or gained independence from Frankish imperial rule.
The Counts of Barcelona became increasingly independent and expanded their territory to include all of Catalonia. In 1137, Aragon and the County of Barcelona merged through the marriage of Ramon Berenguer IV and Petronilla of Aragon and their son Alfonso II of Aragon who took the throne in 1162. His territories were later to be known as the Crown of Aragon which conquered and ruled the western Mediterranean Sea with outlying territories in Naples and Sicily and as far as Athens in the thirteenth century. The Count of Barcelona was the major ruler in Catalonia from the 9th until the 17th century.
Photo by GuillermoPdC
According to the Statute of Catalonia and the Spanish Constitution the official language of Catalonia is “Catalán”, together with “Castellano” (Spanish). The two languages exist in a bilingual situation in Barcelona, in a similar way to “Gallego” (Galician) in Galicia and “Euskera” (Basque) in País Vasco. “Catalán” is the official language of Andorra and is also spoken in parts of Sardinia and France.
In Francoist Spain (1939–1975), the use of “Castellano” over “Catalán” was promoted, and public use of “Catalán” was discouraged. The use of “Catalán” in government-run institutions and in public events was banned. Following the death of Franco in 1975 and the restoration of democracy, the use of “Catalán” increased and the “Catalán” language is now widely used in politics, education and the media. Due to Barcelona’s popularity as a tourist destination “Catalán” and “Castellano” are not the only languages that you will hear on the streets. It is a city bubbling with a vibrant blend of various different cultures.
“Castellano” (Castilian), the official language of Spain, is a Romanic/Neolatin language that originated in northern Spain, gradually spread throughout the Kingdom of Castile and evolved into the principal language of government and trade. It was taken ly to the Americas, Africa and Asia with the expansion of the Spanish Empire between the fifteenth and nineteenth centuries. Today, it is one of the top three most widely spoken languages around the globe. 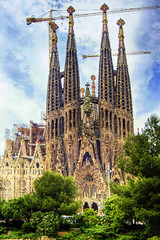 Barcelona is a city full of fantastic parks. Urban parks, historical parks, forest parks and botanical parks. “Montjuïc” park is the largest park, located on the mountain of the same name, followed by “Ciutadella” park, “Guinardó” park and “Güell” park, designed by Antoni Gaudí.
Antoni Gaudí (1852-1926) was a Catalan architect who belonged to the Modernist Art Nouveau movement and was famous for his highly individualistic designs. He was born in the province of Tarragona in southern Catalonia and is widely acknowledged as a key element of what makes Barcelona so special. His most important works include “Park Güell” (1900–1914), “Casa Milà” (1905–1907), “Casa Batlló” (1905–1907) and, of course his unfinished masterpiece, “La Sagrada Família”. Gaudí was a devoted Catholic, to the point that in his later years, he abandoned secular work and devoted his life to Catholicism and his “Sagrada Família”.
Barcelona has seven beaches, totalling nearly three miles of coastline. “Sant Sebastià” and “Barceloneta” beaches are the largest, oldest and the most frequented beaches in Barcelona. The Olympic port separates them from the other city beaches: “Nova Icària”, “Bogatell”, “Mar Bella”, “Nova Mar Bella” and “Llevant”. These beaches were opened as a result of the city restructuring to host the 1992 Summer Olympics, when a great number of industrial buildings were demolished. There are several impressive skyscrapers, the tallest being the Hotel Arts and its twin the Torre Mapfre, followed by Torre Agbar.
Photo by Wolfgang Staudt 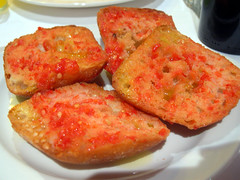 Catalonia has a reputation for fine modern and traditional cuisine. Barcelona cuisine is characterized by a flair and creativity that other Spanish regions lack. A pioneer of modern cuisine and the “Nueva Cocina Española” is Catalan chef Ferrán Adrià. Adrià, one of the most famous, most imitated and well respected chefs in the world. It is easy to recommend a visit to one of his wonderful restaurants, but of course you should be prepared for a hefty bill. Adrià is often associated with “molecular gastronomy”. However, he prefers to call his style “deconstructivist” and says his goal is to “provide unexpected contrasts of flavour, temperature and texture”.
Barcelona food has three staple ingredients however: tomato, garlic and olive oil. Due to its proximity to the Mediterranean, great seafood dishes are easy to find and there are also clear signs of the influences from neighbouring France and Valencia. Valencian influence can be seen in the variety of rice dices that are available in Catalonia.
Some popular local dishes include “Pa amb tomàquet” (thick toasted rustic bread with garlic, salt and tomato rubbed in and olive oil drizzled on top), “Zarzuela” (a seafood casserole that can include any combination of different types of white fish, prawns, shrimp, squid, mussels, clams, crayfish or lobster with olive oil, tomato, lemon, paprika, white wine, sherry and other spices), “Fideua” (similar to paella,but instead of rice, the base is “Fideus” – short, skinny noodles) and finally “Crema Catalana” (a cold custard dessert with a crispy, caramelized sugar coating).
Photo by arquera