Watch full episodes of Aída here on the Telecinco website 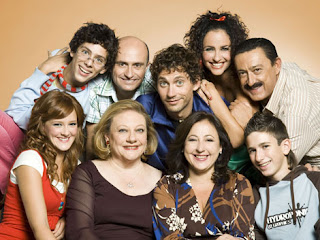 Aída is a very funny Spanish comedy sitcom set in Madrid that spun off from another popular sitcom called “7 Vidas”. The show first aired on January 16th, 2005 and is produced by Globomedia for the Spanish network Telecinco. The show has huge viewing figures in Spain and has also received several awards such as the Ondas Award for Best Spanish Sitcom.
Aída follows the life of single working mother Aída García (Carmen Machi) who has to move to a new neighbourhood with her mother, Eugenia (Marisol Ayuso), brother, Luisma (Paco León) and two teenage children, Jonathan and Lorena (David Castillo and Ana María Polvorosa). Aída spends time with her best friend Paz (Melanie Oliveras) who is a local prostitute, Chema (Pepe Viyuela) a convenience store owner, his effeminate son Fidel (Eduardo Casanova) and Mauricio (Mariano Peña) a chauvinist bar owner.

Changes were made in Season 6 when Aída was written out of the series, as Carmen Machi left the show to pursue new projects and Soraya and her daughter Aida were introduced.